The Darshill Conservation Society (DCS) is a charity, which is responsible for a small area of land to the west of Shepton Mallet.  The charity was set up in order to care for this land when the larger area known as the Old Silk Mill Site was developed for housing.  The whole area falls within the Shepton Mallet Conservation Area as being of visual, archaeological and ecological importance.  The land for which DCS is responsible includes woodland, the millpond and land between it and adjacent houses, and a small car park.

DCS is a very small charity and, in the past, has experienced difficulties in managing its land.  Eve Tigwell was asked to become involved through Somerset Wildlife Trust’s East Mendip Area Group, and discussions with DCS Trustees resulted in this project being run.

The four main aims of this project were:

2.                  To note any fauna present, especially species which are more likely to be of interest to the visitors (mainly birds, mammals and larger insects)

The project site lies to the west of Shepton Mallet in the hamlet of Darshill, between the A371 Wells Road and Back Lane.  The woodland area includes the Orledge Spring and secondary springs, all of which feed a stream leading into the millpond.  The River Sheppy runs alongside the millpond, the water from the stream joins the river at the far western edge of the site.  The millpond area consists of a series of watercourses interspersed with islands, which have formed as the pond has become silted.

There is one public footpath in the area, linking the A371 Wells Road with Back Lane.  There is also a private access path along the north edge of the millpond for the adjacent houses.

Overall grid reference: ST608439.  Altitude: varying around 100m.  A map is in Appendix A: the numbers relating to the Somerset Environmental Records Centre’s (SERC’s) designations (see below).

The soils are neutral to acid, being thin and stony.  The parent rock is Dolomitic Conglomerate with overlays of Lower Lias clays and limestones with shale partings.

The site has a long, well-recorded history involving silk and woollen mills, and at least one brewery.  An excellent report (Hollinrake, C & N.  Archaeological and Historic Features in the Vicinity of Middle Mill, Darshill, Shepton Mallet) was produced covering these aspects of the area for Mendip District Council (MDC): this appears to have been produced in 1996.  Some parts of the site were used for fishing farming in the 1980s; this probably involved deepening some of the water channels.

The historic, archaeological and ecological significance was recognised in the MDC Planning Brief (1996).  Planning permission for development of the area was granted in April 1997.  Section 106 agreements were drawn up to transfer certain areas of land to the Trustees of the newly formed Darshill Conservation Society.  Land was transferred then, in July 2001, and finally in 2011.

Various surveys and management proposals have been drawn up for the site.  The earliest known survey was reported in 1986 by M Telford: this lists species from a range of taxa.  Unfortunately the lack of proper names and species designations makes this less useful as a base-line survey.

It is clear from these documents that, although many changes were proposed for the site few, if any, were implemented.

A full botanical survey, with notes on other taxa was carried out in 1997 by SERC.  This divides the site into various areas, some of which are outwith this project’s site and have been developed for housing.  For the purpose of continuity, this report will use the same numbering, which is as follows:

Those areas adjacent to the A371 Wells Road suffer from some fly tipping and litter.  The stone wall between the road and the site is well maintained, and the boundaries to the site are relatively clear.

Survey visits were carried out during April, May, June and July 2011.  At each visit all species seen or heard were recorded, with plants being allocated to the relevant area(s) within the site.  Notes were made concerning potential deleterious effects and possible improvements to the site.


Details of the flora and fauna seen during the survey visits are listed in Appendix 2.  These are grouped by taxa and by type (for vegetation), and are listed in alphabetical order using the nationally recognised common names for ease of casual reference.  The Area column indicates from which areas each species was recorded, whilst the SERC column indicates the same from the 1997 survey.  Appendix 3 lists those species which were recorded in the 1997 SERC survey, but not in this 2011 survey.  The analysis of these two appendices allows a comparison to be made of floral changes over the 14-year period.

This is a small area of woodland dominated by Ash (Fraxinus excelsior) and Sycamore (Acer pseudoplatanus), with understorey and ground flora being relatively typical of this type.  There is relatively easy access from the adjacent busy road and the bulk of the litter and fly tipping is in this area, although access for educational visits would be more difficult.

There is little to indicate that this is ancient woodland, but the sloping and damp nature of the area has probably precluded major agricultural activities, although the whole area appears to have been disturbed.  The trees appear to have been managed in the past with some evidence of coppicing, especially of hazel along the roadside.

The understorey is relatively varied, but is being increasingly invaded by a garden plant (Wilson’s Honeysuckle - Lonicera nitida), which was probably planted as a hedge edging the stream.

The Darshill spring feeds directly into the stream, whilst the Orledge spring is partly surrounded by stonewalling and feeds into an undefined pool.  The stream and pool are both becoming clogged with fallen timber and vegetation.  There are reports of a range of aquatic invertebrates (dragonflies, damselflies, water snails, shrimps and caddis fly larvae).

There is evidence throughout this area of bird and small mammal activity.

Willows (Salix species) dominate this complex of streams, pools and islands, although other tree species are also present.

The understorey and ground flora includes species typical both of Ash/Sycamore woodland and of lowland wetland species.

Local residents are clear that this area has become increasingly shaded over the years, with tree growth being unmanaged, and that the areas of open water are getting smaller.  Comparing the current survey with the plant lists from the SERC survey supports this: several wetland species are no longer evident in the area.  There was little evidence of aquatic invertebrates: possibly another indication of an increasingly shaded watercourse, which may also be drying out.

The River Sheppy probably inundates the area: this is of particular concern as the Sheppy can carry matter from upstream and from road run-off.  The dam, which had been built to prevent all but the most major of inundations, is in poor repair and is unlikely to be effective other than at a low river level.

The wall along the southern edge of this area is footed by a bank of varying width, dependent on the level of the Sheppy.  Vegetation here is a varied mix of native and non-native species.  The wall has a range of holes and is undoubtedly a breeding habitat for a range of species (birds, mammals, amphibians, reptiles and invertebrates have all been seen here).

This is the most ecologically diverse area of the site and, combined with its historic and archaeological aspects, it should be possible to have it listed as a Local Wildlife Site.  This designation would give it added protection from any future developments.

The bulk of this area provides access for the houses to the north of the site.  Where it curves around to the east of Area 3 there is a large area of Wilson’s Honeysuckle and a large Western Red Cedar (Thuja plicata), with some seedlings.  This area is being invaded by garden escapes and, in some places, is clearly used by the residents for outdoor living activities and livestock.

Whilst not being particularly interesting from a species-mix approach, this area does provide the best access for observing wildlife and for any educational visits.

The main direction of the management plan is to:

·               Maintain the millpond which provided water for the silk mills by managing the vegetation, especially the various Salix species

·               Manage the flora and fauna in order to maximise diversity, with particular attention to the less common species and those which have declined or disappeared in recent years

·               Provide access for the local community and for possible educational visits.

·               Establish safe access: possibly a bridge over the stream rather than access over the wall from the road

·               Secure access from the road by laying the existing Hazel (Corylus avellana), Elm (Ulmus procera) and other suitable plants

·               Pollard or remove Salix and other tree species on a three-year programme, creating areas where sunlight can reach the islands and the water

·               Improve and maintain as a controlled public-access area, with particular consideration for those residents

The Section 106 agreements imply public access to the area.  It should be borne in mind that the site does provide some protection and privacy for the residents from the busy A371 Wells Road.  Opening up the whole site and advertising public access could therefore be detrimental to local support for implementation of the management plan.

Dobbies Garden Centre in Shepton Mallet already runs an educational programme for local schools, and is looking for an area in which to run wildlife activities.  Management at the Centre has indicated that they would be willing to work with DCS in order to implement a management plan that would enable to site to be used for this purpose.  They have currently set aside a proportion of their community budget for this purpose.  The member of Dobbies’ staff who is already working with the local schools would manage visits to the site.

Lack of management will mean that this site will degenerate into damp woodland increasingly dominated by non-native invasive species.  Such degeneration would mean losing its historic and ecological significance in the area, against the principals of DBCS.

The management plan mainly involves removal of excess vegetation such that the important physical features of the site are retained with their accompanying flora and fauna.

Volunteers could implement the bulk of this management plan.  The Somerset Wildlife Trust’s East Mendip Area Group Conservation Volunteers have indicated that they are willing and able to assist DCS and local residents with this implementation.  Grants to cover the necessary expenditure should be sought from Dobbies Garden Centre and other local sources.

It should be possible to have the site listed as a Local Wildlife Site. 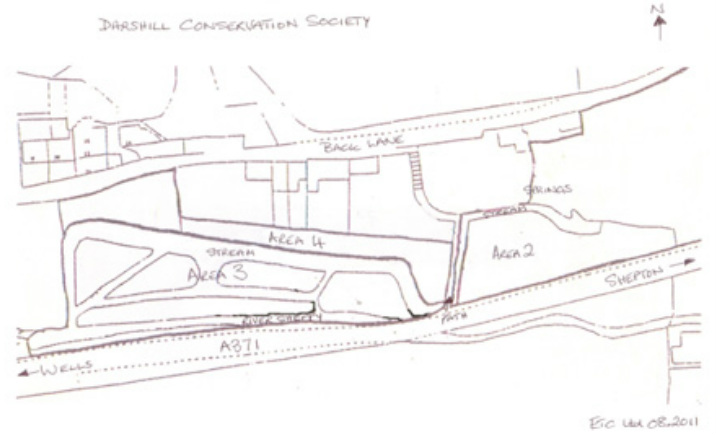 The most obvious species are the plants, so these are listed first.  Mammals were surveyed using visual signs: no mammal traps were used due to time constraints.  The bird list is probably also incomplete as no nocturnal visits were made; this was on the basis that this survey was aimed at daytime visitors.

All the lists are in alphabetical order using the nationally recognised common names for ease of casual reference. 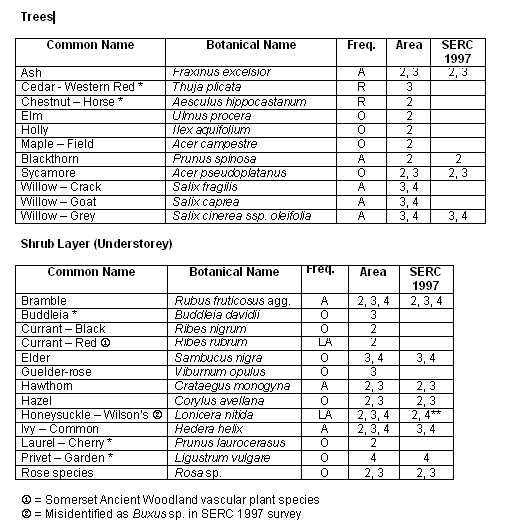 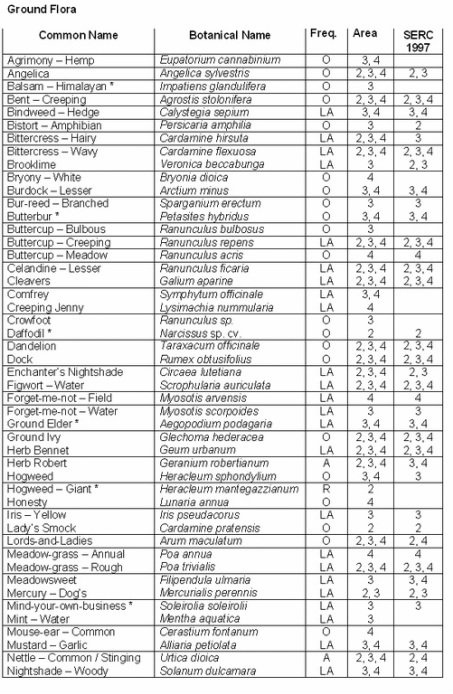 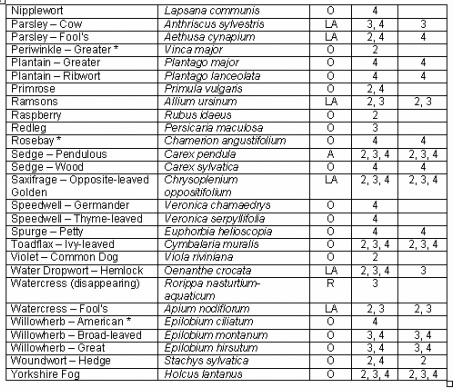 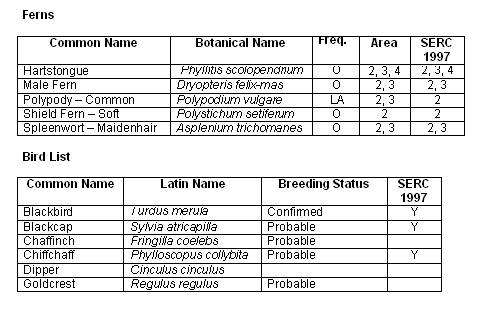 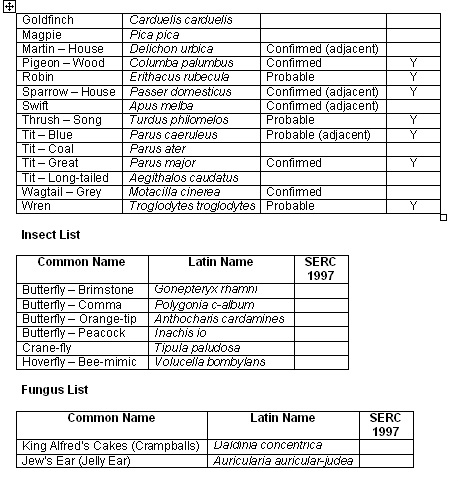 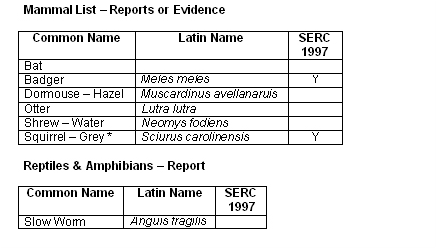 The following species were recorded by the SERC Survey in 1997, but were not re-located during this 2011 survey. 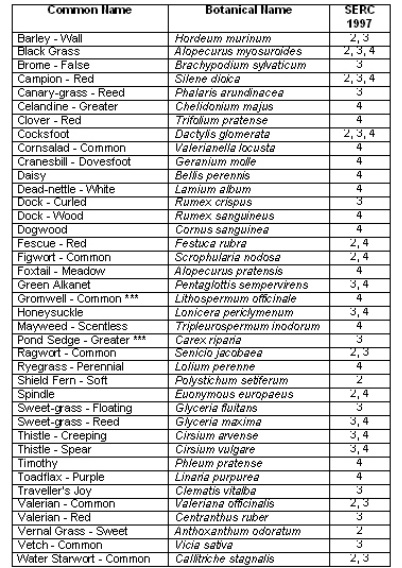